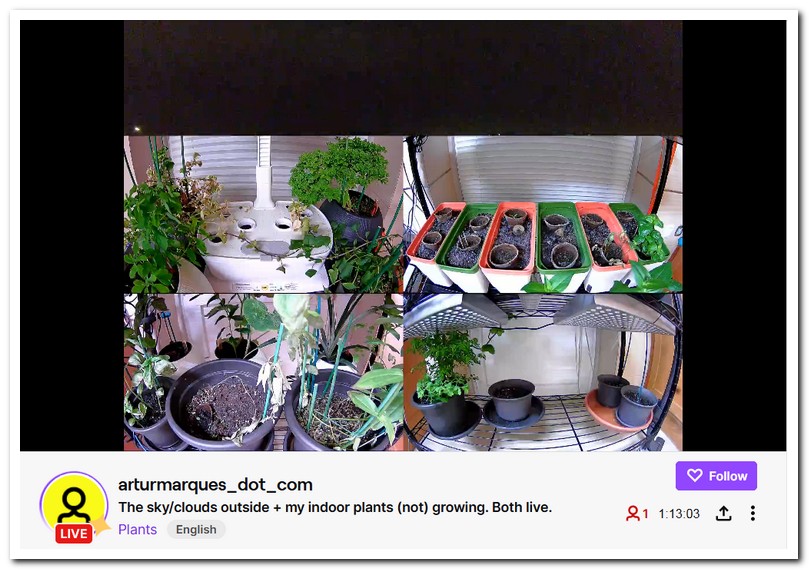 I decided to add a 5th camera to the live stream of my plants (not) growing. This new camera captures the outdoor sky/clouds, and serves as a natural reference to what time of day is it, since I do not overlay any date or time indication in the sources. As I write, it is dark outside – not the best timing :).

For now, the stream is available on Twitch: https://www.twitch.tv/arturmarques_dot_com.

In the past, instead of a live stream, my option was to build time-lapse videos. To assist in the process, I coded solutions that build automatic time-lapse videos from images datasets, with configurable quality. When using these tools, I usually build 24 hours videos, but I could request the output of a larger or shorter time span – for example, I have enough material to construct months-long files. The key reason why I have not been doing so, is that I have moved much of the raw data to the cloud, which is not as instantaneously readable, as local physical volumes. When I started playing with these media and doing these easy, fun, observations, one key reward was being able to promptly unveil whatever had happened in the past x hours.

I will adapt my solutions to the new cloud storage and automate the process again. Until then, the live stream should be available with some regularity.

For long, I have been having fun with timelapse videos of my plants growing. Some of those videos have reached
this blog @ https://arturmarques.com/wp ;
and
my main youtube channel @ https://www.youtube.com/channel/UCUa0DzKskGo0iRYP8QzWsvA/

Today, I decided to combine the streams from four of the cameras that take the raw snapshots for the timelapse videos, into a single video feed. I am putting it live on Twitch:

It is live from my place, but it is all fully automatic. I am not monitoring the Twitch room and feedback, if any. It is an experiment, to check how reliable the stream can be, and what kind of interactions it can ignite on self-motivated spectators.

Four of the vases – the ones on upper-right corner of the video stream – are trying to grow Chili seeds, since yesterday. I read that it is hard to do it, with temperatures below 30. The temperature in the room where the plants are, is below that, so there is a high chance of failure. It is very probable that nothing will happen for many days.

The plants are on artificial light for ~8 hours/day. The rest of the time, they live with whatever ambient light the room gets, which can be very irregular. When the room gets dark enough, the plants will remain visible with infrared lighting.
In an effort to have something on camera, due to the difficulty in growing Chili, I have also planted Dill and Mint.

Enjoy, if you can.