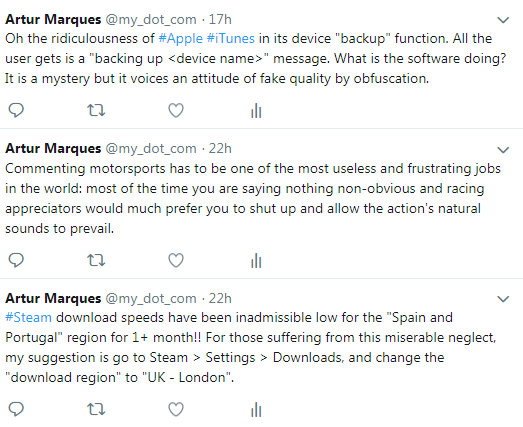 About ebay.com’s handling of site language:
@ebay site handling of language is a mess. It presents itself to me in bad PT-BR, but only in some pages, while others (sitemap.html) remain untranslated. Bad! Some PT-BR words are inadequate to a European user, namely “cadastro”, which means “criminal record” and not “sign up”.

About steampowered.com’s handling of download bandwidth for users in the “Spain & Portugal” region:
#Steam download speeds have been inadmissible low for the “Spain and Portugal” region for 1+ month!! For those suffering from this miserable neglect, my suggestion is go to Steam > Settings > Downloads, and change the “download region” to “UK – London”.

About the bad obscurity of Apple’s iTunes software regarding its backup process:
Oh the ridiculousness of #Apple #iTunes in its device “backup” function. All the user gets is a “backing up

About commenting on motorsports events:
Commenting motorsports has to be one of the most useless and frustrating jobs in the world: most of the time you are saying nothing non-obvious and racing appreciators would much prefer you to shut up and allow the action’s natural sounds to prevail.