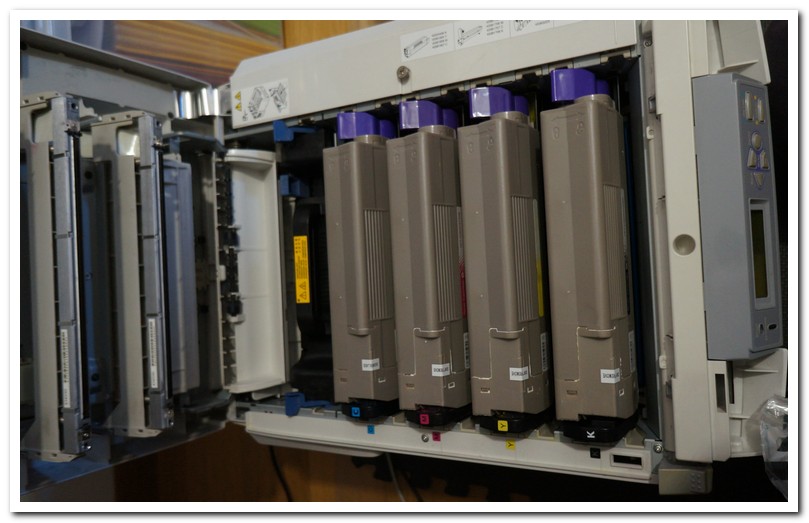 I recently bought black and cyan “drums”, for an OKI C5600N color laser printer. Some color laser printers have toners and drums in separate units, as it is the case. As far as I understand, the toner is the part that holds the “ink”, whereas the “drum” is the part to which the toner attaches, and then has a cylinder that, through electromagnetism, controls the toner to be used in a specific print. With time, this cylinder wears out, so it is a consumable, as the toner is.

I have previous experience in installing drums in this printer, but I have only used “originals” before. This time, I risked a certain alternative brand, from a seller in amazon.de.

I first installed the black drum, because the printer was reporting that the life of the original as low, at ~5%, and I mostly print in mono.
The installation itself went smoothly, but the printing results were terrible: full black pages.
Upon removing the drum, to check what was going on, I noticed quite a load of black toner on the transfer belt, which is yet another consumable in most color laser printers. I cleaned it, retried, and got the same result. I reopened the printer and found, again, plenty of black toner on the belt’s film surface, as if the drum was leaking, heavily. Technically it sure was leaking. Its magnetic transfer surface, was fully coated with black toner, thus not showing it’s the green or blueish looking transfer layer, that normally shows up.

Although I was not yet needing to replace the cyan drum, I started to question its condition: would it also fail?
With the original black drum now in place, I inserted the existing cyan toner into the replacement cyan drum and was faced with the same surprisingly awful results: cyan toner spillage onto the belt/film, and pages not exactly “fully” cyan, but with a heavy “cyan mask”. Moreover, as with the black drum, the cyan drum displayed a very thick cyan toner sedimentation over its surface, instead of the normal clean green or blueish film.

Upon the removal of the replacement drums and reinstallation of the originals, such was the thickness of the toner layers in the cylinders, that spills were unavoidable. I spilled toner everywhere: to the floor, into the packages that contained the drums, to my hands, clothes, etc. Nearly everything in a radius of ~30 cm got bits of toner. It was a disastrous afternoon.

In the end, I trashed several A4 sheets, used many cleaning tissues, filled the drums’ card boxes with considerable amounts of wasted toner, and ended up with a printer in the same working condition as when the day started, but surely with less consumables available.

Something was catastrophically wrong with these products, or they got faulty during shipment. Again, I have replaced drums before, cleanly and with instant positive results. This should not have happened.

Due to professional matters, I am now sometimes required to remotely meet with others, using “Microsoft Teams”. Having had previous experience of other synchronous communication tools, namely Discord and Zoom, I expected (1) a similar setup process, and (2) a similar “collaboration experience”.

Regarding (1), the setup, I expected that it would be a matter of downloading some installer, creating a product related account, and logging-in. It was not that smooth, but close.

I am on Windows 7, feeling no need to update to Windows 10, and not using Office365. Still, “Teams” provided an OK installer, with all the necessary files – not one of those “mini installers” that will later require further downloading. Get it at:
https://www.microsoft.com/en-us/microsoft-365/microsoft-teams/download-app

In my view, “mini installers” are nothing but a barrier to one’s end, so it was a good start. But there are annoyances: the user is given no option regarding where the files are to be installed. In Windows 7, “Teams” installs to:

And, at least three files will require Internet access, without previous warning:

Notice that Squirrel is an open source project, which is great to see, and highly contrasts with Microsoft’s closed attitude regarding most of its own products. It also uses the NuGet package manager and exhibits some reported security weaknesses. Check https://www.bleepingcomputer.com/news/security/microsoft-teams-can-be-used-to-download-and-run-malicious-packages/

Software security is a subjective topic: you can have the most insecure piece of code, and nothing bad will ever happen to your digital assets, if, for example, you isolate it in such a fashion that it cannot communicate with other software and/or access relevant data. For that, you could use some sandbox approach and/or a firmly closed firewall and network infrastructure.
On the other hand, you can have a supposedly “secure”, no issues known, software, and relax on the data/network/firewall environment protection, ending up in a situation that is as dangerous, if not more. It is the “unknown unknowns” that often cause the most serious problems.

After the installation concluded, it was only a matter of minutes for creating firewall rules, before “Microsoft Teams” was ready to launch.

The next step – account creation – was, and is, confusing to me: to use “Teams”, one must have an account, but what exact type account it must be, is a mystery. It seems to depend on intended usage and even invitation source. If one arrives to “Teams” with an invitation to meet with an organization running a full featured Office 365 subscription, then the account requirements might different from those creating an account on his/her own. In fact, if a user answers that he/she will be using “Teams” to meet with “friends and family”, the installer aborts and suggests “Skype”!
At one point, I was creating a “Microsoft account”, redirected from a previous live.com account login. When reentering the login data, I was told that my password’s length was “too long” – I then understood that entirely new credentials were being created. I now have multiple Microsoft.com accounts, some work for gaming, some work for mail, some work for Microsoft Teams, only. I am confused, but that is probably just me.

When the software finally accepted the account, and displayed the correct “team” with whom I was to collaborate with, I thought that was the end of all barriers and we could start working together. Naive.

Regarding (2), the “collaboration experience”, I took the following notes.

I usually record all my sessions. When using “Zoom” (https://zoom.us) it is easy to understand what one is doing and it simply works: one can choose to record to the cloud, or to a local storage path. No cloud for me.
Similarly, I expected “Microsoft Teams” to allow the user to choose where to record the session, either via settings, or upon ending a recording. There is no such option in settings, so I started recording, only to discovery that every stream is automatically uploaded to:
https://web.microsoftstream.com/browse
where it will remain available to, at least, everyone in the hosting organization, not private to the creator, or even private to the team that was running the meeting! This is quite surprising.

This recording behavior was not obvious to me and, I assume, to many others. From what I could perceive, people interpret “Microsoft Teams” recordings, as private digital assets, for their exclusive consumption. As previously stated, it is not like that: the recordings automatically become available to all the members in the hosting organization. I dared browsing some of the streams available in my context, and I wonder if some of them are not accidental: people might not be aware of their publication, because the software is opaque by design and does not make it explicit the properties and privacy level of such recordings.
It was also a pain to delete my own accidental video: not trivial at all. I had to Google how to do it and did not take note of the procedure – it would have been useful right now, to complement this post.

One visual annoyance is the lack of control “Microsoft Teams” gives the user, regarding adjustments to the audio and video devices used during the meeting. For example, if light conditions change and one wants to make the camera image brighter or darker, there is no in-software control for that.
Unfortunately, the same goes for all other synchronous collaboration tools I have used, and what was different in “Teams”, in my particular case, relatively to other solutions, was the “zoom” level of the camera. I was using a webcam with a very wide lens and “Teams” locked it, on the widest possible view angle, unveiling more than what I intended of my surroundings. The zoom level on other software is set above the widest angle; here, it is set at the widest value, with no control available to tune it. All I can say is that, regarding video, all these synchronous collaboration tools could take a lesson from the free and open source software “webcamoid”, which gives the user full control over all the exposed device settings.

It seems that others have already complained, to no avail:
https://microsoftteams.uservoice.com/forums/555103-public/suggestions/32559460-camera-adjustments-in-meetings

One final disturbing design option is the “invite” system. People who participate in a meeting have to be “invited”, yet the invite comes from Microsoft ( Microsoft Teams

If I were to choose, I would not pick “Microsoft Teams” as a collaboration solution over any of the others I have experience with. Microsoft centralizes all the process, from the invitations, to the session recording, with no alternatives given. This is not polite: it steals users crucial freedom and control.

In a single paragraph: Microsoft Teams is opaque by-design, frustrating to use, inferior in the relevant features to the known alternatives, and hijacks the teams’ freedom, centralizing invitations and recordings.