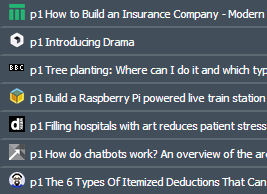 For years and years, Janetter (https://twitter.com/Janetter_jp) was my window to Twitter. Instead of using Twitter via a Web browser, or via apps for mobile devices, I used Twitter via Janetter, for Windows 7 desktop PCs. It worked great: it presented me a continuous stream of tweets, as tweeted by those I am following, without issues, without ads, without distracting discussion threads, allowing its user to consume what was being produced, without interferences.

At some stage in history, there was a good collection of clients for Twitter, for Windows 7 desktop PCs (Janetter alternatives); I used all of the following:

Janetter remained my favorite, for different reasons. These days none of the alternatives mentioned exist, with the exception of TweetDeck, which is more of a subscription service to manage your social presence, and not exactly a plain Twitter consumer, so it does not count.
I remember that TweetDeck (in its early days, when it was mostly a Twitter client), Seesmic, MetroTwit and DestroyTwitter, were not as efficient in managing screen space, wasting panes and pixels in “good looks”, that could not present as many and as readable tweets, as Janetter did. SharedMinds got close to Janetter, but still did not win my preference.

Roughly, two years ago, Twitter made significant changes in the way other software can access Twitter users’ data, and interact with the social network via its official API. Those changes were a death sentence for nearly all the existing Windows desktop Twitter clients. Users, who had already authorized apps, could keep using them – I kept using Janetter -, but new users were not possible.

Since Janetter satisfied me, I never felt the true impact of that Twitter change: my client kept working fine.

In a matter of hours, it became clear that Janetter, at least for PC, was gone. Something either on Janetter’s network or on its interface to Twitter had been plugged-off. It was time to find an alternative.

I was very pessimistic: I assumed there would be nothing working the way I like. My first searches for alternatives intensified that suspicion: pointers and pointers to software that no longer works, that is no longer supported, and/or that is not available for Windows 7 desktop.
With the same ease that I feared the worse (which would be to use Twitter via a Web browser), I found the wonderful “TweetDuck”!

TweetDuck is a perfect Janetter alternative, with the advantage of handling embedded media better; it is also superior in communicating expanded URLs to the browser.

One final note: Google fails miserably in searching for “download TweetDuck”, guiding you to aggregator sites.

Here is the URL of the official site for TweetDuck:
https://tweetduck.chylex.com/

This is open source software, with source at GitHub:
https://github.com/chylex/TweetDuck