One of the reasons I play racing games, is because while I am at it, I am doing moderate physical exercise. For example, while playing “rFactor x”, “F1 xxxx”, or “Project Cars x”, at a demanding difficulty level, I have to focus and apply myself. These car racing games, when played with a steering wheel and pedals, configured to offer little to no assistance, and with the A.I. (Artificial Intelligence) set at ~100% strength, will require plenty of arms + legs + abdominal movements!

It was fun and hard. Here is the full “TV camera” replay of those 15 laps race. I am on the Renault number “2”.
Enjoy. 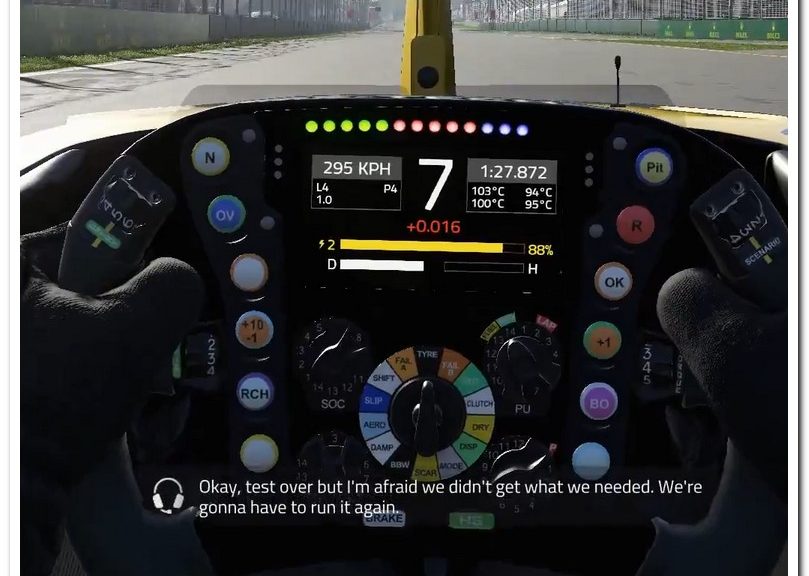 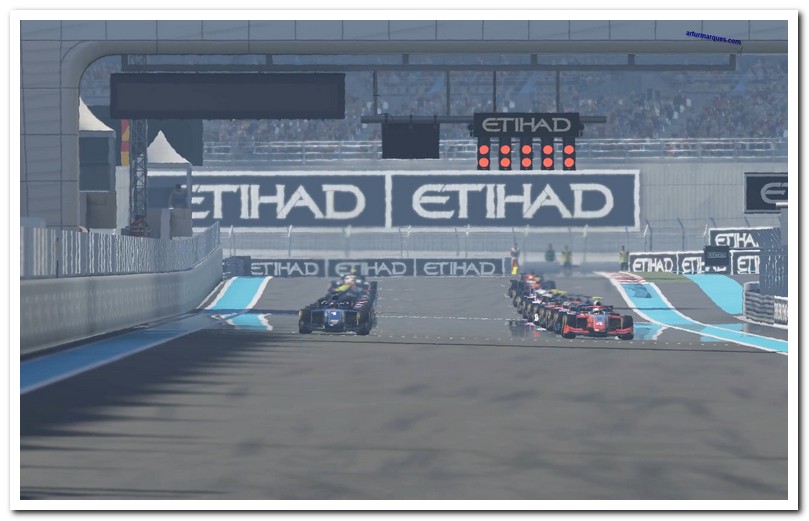 Do not fear: the player always graduates to F1. One of these days I’ll continue the game and try those cars. 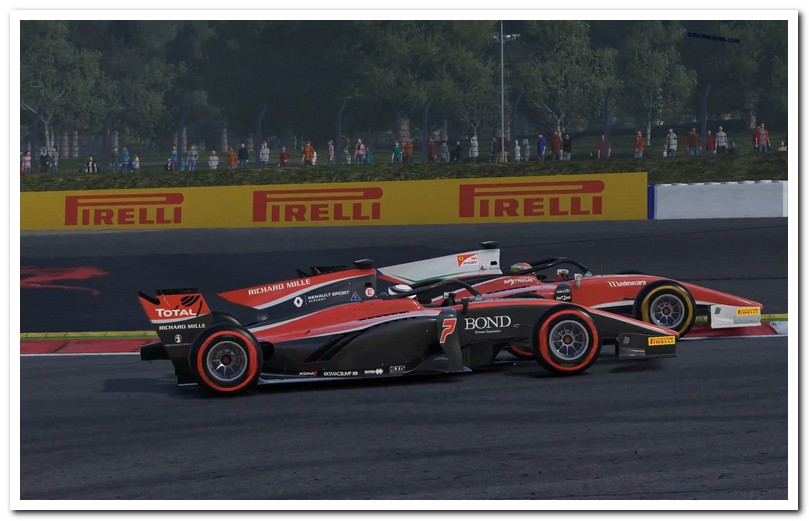 On event #2 of 3, the final laps of the Austrian GP, you have to deal with a broken front wing. The challenge is to recover the lost ground and go overtake your adversary. I failed. I lost no places after the forced pit stop, but I could gain none either. The race pace of the A.I. was just too strong for my current skill. 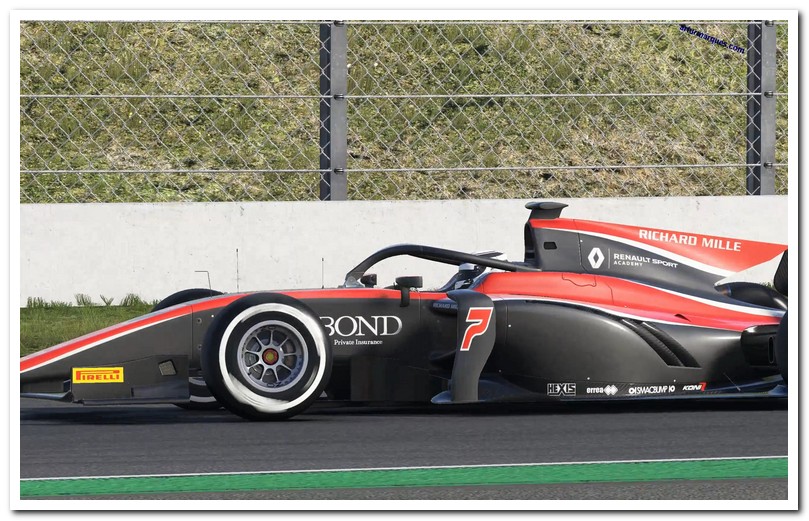 Codemasters’ “F1 2019” game, which I play on the PC, features a “career mode” that consists of three events of the F2 2018 championship: Spain, Austria, and Abu Dhabi, the closing race. When a player plays the “career” mode, he/she must first complete these F2 events, before graduating to F1.
There is no “practice” mode in the game; the closest to it, is an option to race timed laps. This means that, for first time players, like myself, the handling of the car will be a complete unknown and unless playing on a very low difficulty level, success (race wins) is impossible.
My career is against A.I. (Artificial Intelligence) set at 98% and no driver assists, other than some traction control. The game should warn you that you cannot change these settings, ever, unless starting a new career. Makes sense, but the game’s defaults for the Logitech G29 racing steering wheel – my controller – feel so bad, that I had to spend significant time in tuning it to an “acceptable” state. That meant many F2 2018 Spain restarts, until I could control the car, at all.
At some point, I was comfortable enough to complete the challenges. I recorded videos of those three F2 events.

F1 2019 has great visuals, but its handling is well below the superb rFactor 2 (RF2) standard. RF2 feels “natural”. The behavior you get from the RF2 cars is just credible. Yet, because of its “social” component, including ESPORTS, F1 2019 is gathering momentum. It is “unfair” from a realism perspective, but it is what it is. I suppose F1 2019’s realism deficit versus not only RF2 but also versus iRacing, is rooted on its compromise to support gaming consoles (Playstation, XBOX), which are devices for audiences who prefer “fun” with stick controllers above “simulation”.

Today and in the next two days, I publish the “TV perspective” videos of events #1 to #3 of 3.

Event #1/3 is the closing laps of the Spain 2018 F2 race. In this first game “career” challenge, the story sets you with a “turbo issue” and a request from your team, to let your teammate pass. I did not have the pace to hold my teammate, so the request was easy to comply with :).
As the video shows, although the car was “controllable”, I was locking the brakes too often, due to inexperience, a yet poor control setup (that would improve days later, but remains still far from perfect), and because of damage that I suffered from contact against another car. “Damage” is another setting that you cannot change without erasing all the saved game data and restarting the “career”. I am playing with “damage” one level below the max “simulation”, and that means that contacts will cause handling and performance problems. The video clearly depicts the car parts that have sustained impacts. 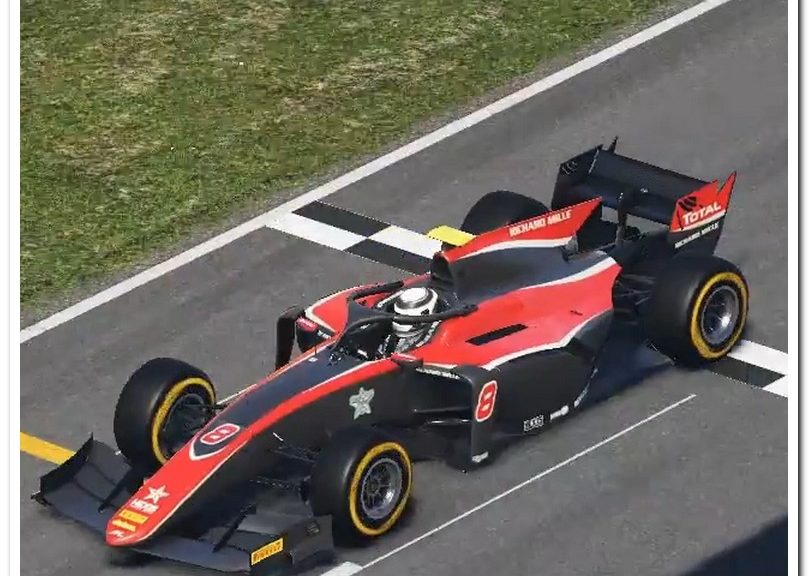 I decided to try the game “F1 2019” (it was 30% off on Steam), and the experience evolved from terrible to interesting. It is amazing how bad the game defaults are: unrealistic handling and audio stuttering are the top issues. These issues seem to affect many players, considering the frequency they appear in support forums, yet – and this is quite a mystery – the big review sites seem immune to such annoyances, not referring how they configured the game to bypass all issues and apparently enjoy a turn-key 9/10 game.

I always perceived the “F1 20xx” game series as “racing fun” for “kids”, i.e., for those just wanting to have a nice looking arcade experience with F1 cars in it. For those who appreciate a “simulation” approach, these games feel ridiculous, sand-to-eyes (look good, drive awful), and unfair to other games on the market, which are so much more “real”, and better handling out-of-the-box.

In my first minutes with it, F1 2019 greatly exceed my WORST expectations. It was unbelievably bad, with video synchrony drama (sometimes, as if driving in slow motion), audio stuttering (interrupts in the audio stream), and a feel of disconnect (not exactly lag, but rather disrespect to what I was asking from the virtual car) between inputs from my wheel + pedals (Logitech G29) and their effective result. I literally could not believe the game was that bad, so I endured in many configuration experiments (hardware and software), until I achieved something enjoyable and worthy of my “simulation” label. It took me three days (more like three attempts in three different days) and I nearly dropped the towel on day 2, but this afternoon was rewarding. Now, in my book, “F1 2019” is the best of all the games in the “F1 20xx” series, which would not mean much (its siblings are not good), if it wasn’t for the “simulator” label.

Having achieved a drivable “F1 2019” game configuration, I hit the track. In a matter of 2+ hours of game play, I progressed up to the top #400 spot in the fastest laps table, racing a Formula 2 in Spain. I still did not try the F1 cars.